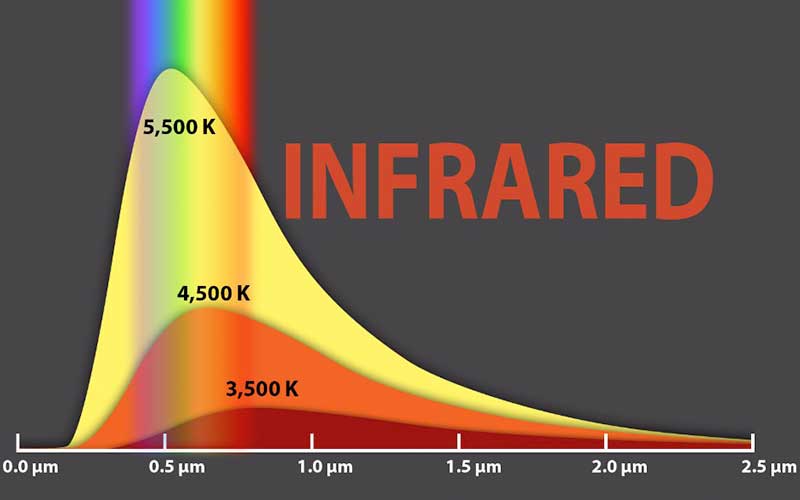 Getting the Earth’s image in infrared wavelengths can show the relative temperatures all over the world.

Infrared light or infrared radiation (IR) is a kind of radiant energy that is invisible to the human eye however, people can feel it as heat.

Every object in the universe can emit IR radiation at some level and the most well-known sources are fire and the sun.

IR is a kind of electromagnetic radiation wherein frequencies in a continuum get produced as atoms that release and absorb energy.

It can go from the lowest to the highest frequency.

When these kinds of radiation go together, they create the electromagnetic spectrum.

According to NASA, William Herschel, a well-known British astronomer, discovered infrared light in the year 1800.

He had an experiment that could measure how the colors in the visible spectrum have different temperatures.

He had thermometers placed in the light path of every color in the visible spectrum and was able to observe the temperature increase when it went from blue to red.

William also discovered that the measurement of warmer temperature was beyond the visible spectrum’s red end.

Infrared waves happen at frequencies above the microwaves in the electromagnetic spectrum.

They are just below the visible red light, which is why they are called “infrared.”

As per Caltech or the California Institute of Technology, compared to visible light, infrared radiation has longer waves.

The IR frequencies can range from around 300 GHz to approximately 400 THz, with wavelengths estimated to have a range from 1,000 micrometers to 760 nanometers.

However, according to NASA, these values may not be definitive.

Just like the visible spectrum of light that ranges from the longest wavelength of red to the shortest visible light wavelength of violet, infrared radiation comes with a range of wavelengths of its own.

According to NASA, the “far-infrared” waves are longer and closer to the electromagnetic spectrum’s microwave section.

You can feel this as intense heat that is the same as the heat from fire or sunlight.

“Near-infrared” waves that are shorter can be closer to the electromagnetic spectrum’s visible light.

Aside from that, it does not emit detectable heat like what the television’s remote control discharges whenever it changes the channels.

One of the ways you can have heat transferred between two places is IR radiation.

Conduction and convection are the other two.

Everything that has a temperature of more than -268°C or -450°F can emit IR radiation.

As per the University of Tennessee, half of the sun’s total energy is emitted as IR and most of the visible light of a star can get re-emitted and absorbed as IR. 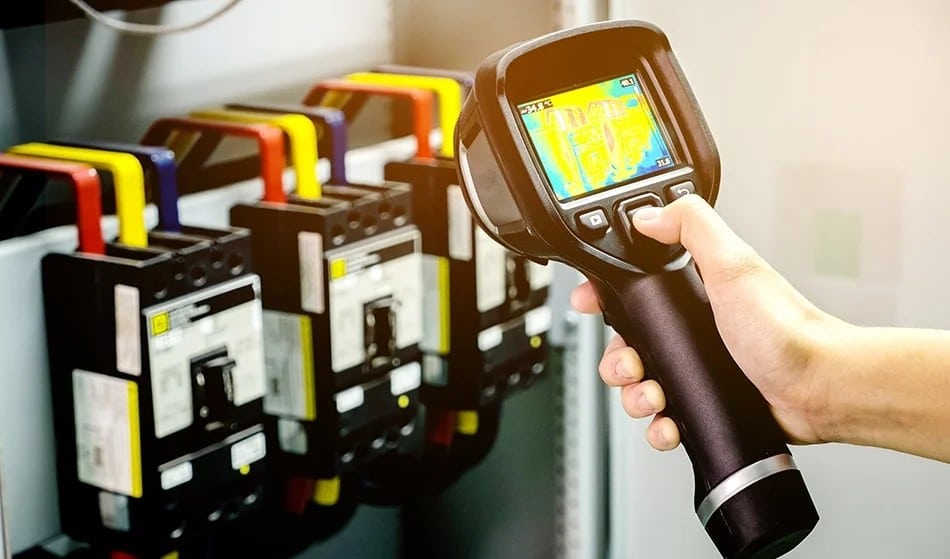 Among the IR spectrum’s best applications are detection and sensing.

Every object on Earth can emit IR radiation that comes in the form of heat.

You can detect this through electronic sensors as those people use in infrared cameras and night vision goggles.

The bolometer is a simple example of this sensor.

As per the University of California, Berkeley (UCB), it consists of a telescope with a thermistor or resistor that is sensitive to temperature at its focal point.

Whenever a warm body gets into the field of view of this instrument, the heat can cause voltage change that can be detectable by the thermistor.

The bolometer’s highly sophisticated version is what night vision cameras use.

These cameras typically have CCD (charge-coupled device) imaging chips that can be sensitive to infrared light.

The CCD then forms an image that you can reproduce in visible light.

You can have these systems in devices small enough to use in wearable goggles for night-vision or any hand-held devices.

It can even be possible for people to use this for gun sights that could include the IR laser needed for targeting.

IR emissions from the materials that have specific wavelengths are measured by infrared spectroscopy.

The substance’s IR spectrum can show characteristic peaks and dips as particles of light or photons.

You can use this spectroscopic information if you want to monitor the chemical reactions and identify the substances.

Included here is the study of 2D materials and molecular systems like graphene. 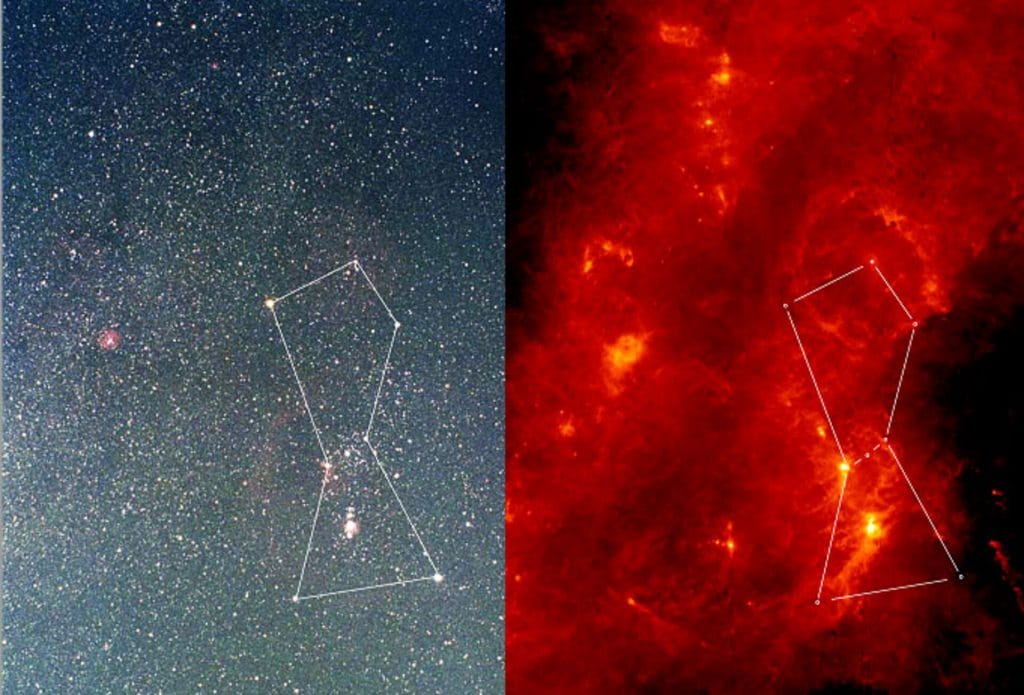 Caltech describes infrared astronomy as “the detection and study of the infrared radiation (heat energy) emitted from objects in the universe.”

Because of the advancements in systems for IR CCD imaging, it allowed for the detailed observation of how IR sources in space are distributed that it reveals the complex structures in galaxies, nebulas, and the universe’s system on a large scale of space.

IR observation is advantageous as it can detect objects that can be too cool to emit any visible light.

It led to discovering previously unknown things, like asteroids, comets, and interstellar dust clouds that appear to be prevalent all over the galaxy.

Particularly useful in the observation of gas’ cold molecules is IR astronomy.

According to the professor of astronomy of Missouri State University, Robert Patterson, it helps determine the chemical composition of the interstellar medium’s dust particles.

They conduct these observations using CCD detectors that are specialized to be sensitive to IR photons.

IR radiation is advantageous because of its longer wavelength.

Because of that, it is not like visible light that scatters so much.

As dust and gas particles can reflect or absorb visible light, the IR has longer waves that just go around any small obstruction.

Since they have this property, people can use IR to observe objects with light that dust and gas obscures.

These objects are the newly formed stars, which are embedded at the center of the galaxy or in nebulas.

Uses in the Household 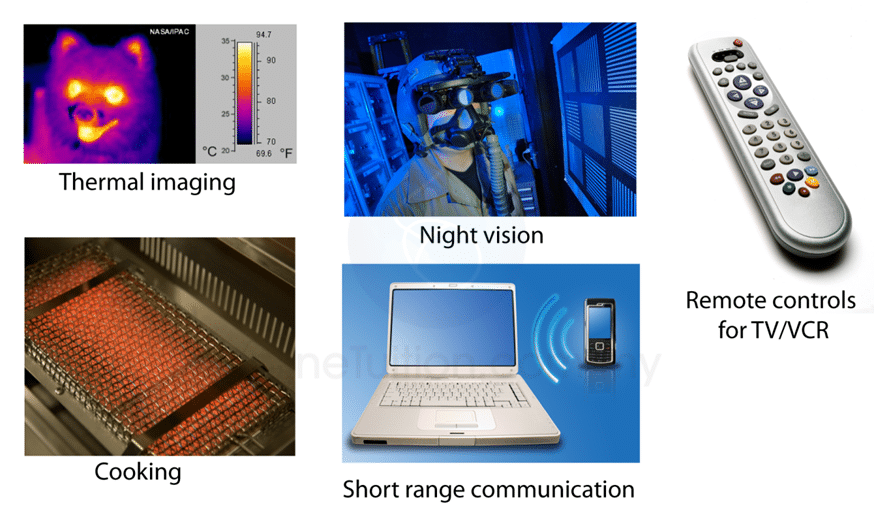 IR radiation is what household appliances like toasters and heat lamps use so they can transmit heat.

The same is what industrial heaters do to cure and dry materials.

Just around 10% of the electrical energy is what incandescent lightbulbs convert into visible light energy.

As declared by the Environmental Protection Agency, the other 90% converts to infrared radiation.

People can use infrared lasers for point-to-point communications over distances that can be a few hundred yards or meters.

Infrared radiation is what the remote controls of television rely on, so their microprocessor will follow the programmed command.